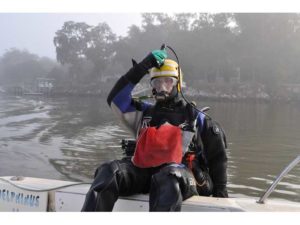 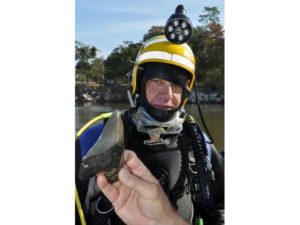 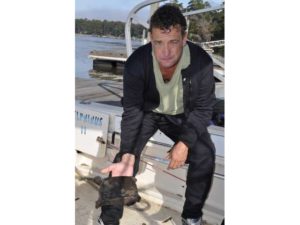 By Caitlyn Boza
Brian County News – 12/14/11
On a foggy winter morning in Midway, Bill Eberlein dons a thick neoprene wetsuit and an oxygen tank and slips into one of the murky waterways that snakes around Colonels Island.

He skims along the floor of the river and uses his hands to sift through the mud, hunting for a peculiar kind of sunken treasure: prehistoric Megalodon shark teeth.

Until about 2 million years ago, a giant species of shark, now called megalodon, roamed the world’s oceans. It spanned more than 60 feet in length, weighed more than 50 tons and boasted five rows of sharply serrated teeth.

“Their teeth are fascinating,” said Eberlein. “They’re so large that people once thought they could only belong to dragons.”

The Erie, Pa., native and Rotary Club of Richmond Hill president has been diving for megalodon shark teeth and other prehistoric fossils in Georgia’s waters since 1999.

“I love the excitement of hunting for something and never knowing what I’m going to find,” he said. “It’s like an Easter egg hunt for grown-ups.”

Under the watchful eye of boat Capt. Gene Ashley, Eberlein dives more than 300 times a year.  With near-zero visibility and strong currents, however, he stressed that fossil diving is not for the faint of heart.

“It can be very dangerous. The mud can mess with your equipment, and you never really know what’s down there swimming with you.”

But despite the risks, diving is Eberlein’s passion.

“It’s like my therapy,” he said. “You don’t have to worry about anything underwater, just focus and enjoy it.”

Several years ago, Eberlein came up with a way to pursue his passion full-time.

“I just dove and dove, and I collected all these teeth. I even bought a boat so I could dive some more, and one day I thought, ‘Wow. Wouldn’t it be cool if I could use the teeth to pay off my boat?’”

And from that idea sprang www.megateeth.com — Eberlein’s online store featuring Megalodon shark teeth and fossils from creatures both past and present.

“It’s something that people really get into,” said Eberlein. “There’s just something about the idea of a fossil, something that’s so old it can show us what the world was once like.”

Although Eberlein’s business has enjoyed success, he said he often finds it difficult to part with his discoveries.

“The price for being able to dive more is having to sell what I find. But at the same time, it means that I get to interact with my hobby beyond diving. By selling the fossils, I get to talk about them, photograph them, meet incredible people who share my interests.”

Polished teeth, fossils and jewelry from Eberlein’s collection can be purchased at www.megateeth.com .