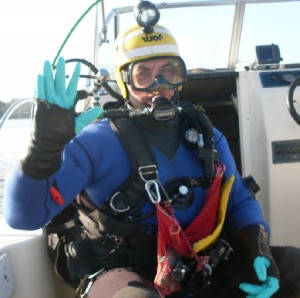 Eberlein will discuss and show prehistoric megalodon teeth and other fossils he has uncovered from the Medway River and other local waters. Megalodons are extinct prehistoric sharks from the Miocene epoch thousands of years ago.
“It’s a shark that was about 70 feet long, and they say that the megalodon shark was probably the size of a large whale today. So think of what a large whale is like, and imagine it’s a shark,” said Eberlein, who has been diving for a quarter of a century.

“I started diving 25 years ago in Erie, Pa., and we used to dive Lake Erie for ship wrecks. In 1999, I was hired by Gulfstream in the IT department and came down here thinking I would be diving in the ocean. Then I met a guy who was an engineer at Gulfstream who said he dove for shark teeth in the rivers. The first thing I thought was, ‘Sharks’ teeth in the rivers?’ And then I was thinking like the little tiny sharks’ teeth, but he brought one [a megalodon tooth] in and I thought, ‘I’d like to find one of those.’ Then I went out and got hooked on it.”

Fort Morris State Historic Site is about 21 miles south and east of Richmond Hill. Turn east on Islands Highway off Interstate 95 at exit 76, then use Fort Morris Road. The site’s address is 2559 Fort Morris Road.
Admission to the event costs between $3-$4.50.