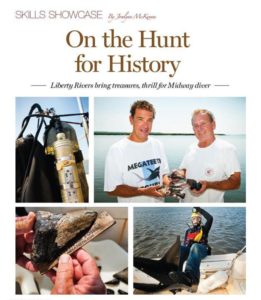 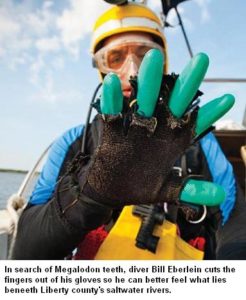 Bill Eberlein has every7-year-old boy’s dream job and it probably would make most adults envious, too. He doesn’t spend his days fighting fires or combating crime — he greets the day by diving Liberty County’s saltwater rivers in search of shark teeth. These teeth aren’t from any shark either, but an ancient dinosaur shark called the Megalodon.

“Scientists believe they went extinct 2 million years ago,” Eberlein explains. “It’s a shark the size of a whale, and since sharks are made of cartilage — not bone — the only thing that remains of them are the shark teeth.”

Rarely do people find opportunities to pursue their hobbies as a full-time career. Bill Eberlein is one of the fortunate few. As owner of MegaTeeth Fossils, he spends his days in murky waters surrounded by shining sun and azure skies as he searches for pieces of history.

“It’s like when you’re a kid on an Easter-egg hunt — you know there’s something out there to find, and you know you’re probably going to find something, but you don’t know what it is … you get all excited,” he says. “When I have a good day, all day I just keep thinking about going diving the next day.”

Eberlein and boat captain Gene Ashley head out around 5:30 a.m. for an excursion, where Eberlein usually makes two dives.

The Midway resident already was a skilled diver when he moved to the area in 1999 for a job with Gulfstream. He began diving in 1986 and logged more than 10 years as a member of a sheriff ’s office underwater search-and-rescue team, dove shipwrecks in Lake Erie and was a scuba-diving instructor.

When a Gulfstream coworker told him about diving for shark teeth, Eberlein was boggled. “I thought that was crazy. I couldn’tbelieve it. I thought, ‘You live here on the ocean, and you go in the rivers for shark teeth?’” Eberlein recalls. “I was thinking of the little ones you find on the beach.”

When the colleague brought in a 5.5-inch tooth, Eberlein decided to give it a try from a Hilton Head Island charter boat.

Eberlein’s coworker told him most likely he wouldn’t find anything on his first megalodon-teeth hunt. With more than 15 years experience, Eberlein was an experienced diver but an inexperienced shark-tooth hunter. “I told him, ‘I just want to find one,” he says. “I found like five or six teeth. I was hooked ever since.”.

Despite his early success, Eberlein, who has master’s degrees in accounting and information technology from Pennsylvania State University, still had no intention of making it a career.

“It kind of morphed into it,” Eberlein says. “What happened was, I was finding more and more. At one point, I had hundreds of them. I just sold them to get rid of them and to help pay for the boat. Every year it just got bigger and bigger.”

The diver has lost count of how many fossils he’s gathered, but says it goes into the thousands. He keeps some, sells some and gives others way for charity events

Typically, there are three types of buyers for the products: eager fossil collectors with premium stashes of earth history; parents whose children are fascinated by sharks and dinosaurs; and the odd “Shark Week” fan who wants to show off to friends.

“My busiest week is when Discovery Channel has shark week,” he says with a laugh. “I get all these emails and questions for shark week.” Eberlein and Ashley spend most of their days out on the water, Eberlein diving deep then crawling around on the floor, searching for Megalodon teeth while Ashley watches and waits for Eberlein to resurface.

“He’ll come up, change tanks and go right back in,” Ashley says. “He’ll go any time, any weather. I think last year the water temperature got down to 39 degrees and he still came out to dive.”

Eberlein’s finds range from 3 inches to 6.94 inches — just short of the shark diver’s Holy Grail. “What you really want to find is a 7-inch tooth, but 7-inch teeth are so rare. I’ve never found one that’s 7 inches,” he says. The day he found the 6.94-inch treasure, Eberlein had an inner dialogue about whether he thought it was a tooth.

“I had maybe 2 inches of visibility and I just kept staring at it … I kept
looking to see where it was broken, and I wanted to come right up and look at it on the boat, and then I thought, well, maybe there’s more down here,” he says. “I just put it in my bag and moved on, but the whole rest of the dive I wanted to go look at it back on the boat because I knew it was huge.

“I have it in a safety deposit box because I’m afraid I’ll break it — it’s the find of the lifetime,” he adds.

Only severe storms keep Eberlein out of the water, Ashley says. Together they’ve worked out a signal to alert Eberlein of lightning. “I just rev the engine three times,” Ashley says. “He comes right up.”

Beneath the surface, Eberlein has very low visibility and little way of knowing what’s happening above water. “Under water, you can’t tell anything,” Eberlein says. “You surface sometimes and you’re in the middle of a storm.”

Because Eberlein spends his time between 40 and 60 feet below the surface and with almost no visibility, he relies heavily on his ability to feel the shark teeth with his hands.

Eberlein dives with normal diving gear like a wetsuit and fins, but he adds fingerless gloves and denim jeans. Because the floor of the riverbeds isn’t always forgiving, the jeans protect Eberlein from cuts.

Megalodon teeth aren’t all Eberlein finds while he’s diving. He’s found mammoth and mastodon teeth and a giant crocodile jaw. Despite how novel these items may seem to the layman, he says none of his finds would be considered rare in the fossil world.

The hobby comes with some unsettling moments, too. Eberlein also has had his fair share of encounters with flopping stingrays, mystery creatures and strong currents — conditions most diving instructors would advise against. For that reason, he cautions that the endeavor is not something to try at home.

But Eberlein laughs when he recalls an encounter with a Savannah customer who told him he was “nuts” for having such a “dangerous job.” The punch line? The customer said he’s a tree trimmer who climbs high into the sky with a chainsaw in hand.

“I feel safer under water than I did driving to Gulfstream every day on the highway … It’s all what you’re used to …,” Eberlein adds. “You have to love this. You have to do it because you love this.”