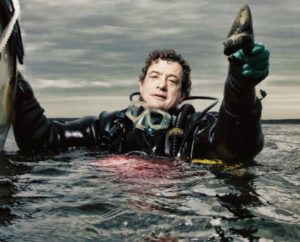 Hunting for Megalodon teeth, inspecting the hulls of giant ships for explosives, washing windows of the city’s tallest buildings—what won’t we do for money? “You couldn’t pay me enough to do that!” That’s usually the response out of people’s mouths when Brady King tells them what he does as a profession—he is a rope-access window washer who sometimes spends up to eight hours a day dangling above the city with a suction cup in one hand and a squeegee in the other. South sought to learn more about the area’s most adventurous, dangerous and killer jobs. Whether these guys are seven stories above the ground or 70 feet below sea level, let’s face it, the competition is going to be pretty slim.

About 40 feet down, in the creature-infested black-water landscape of Savannah’s rivers and oceans, is a bed made up of broken bones. “There are bones, as in fossilized bones, frommillions and millions of years ago,” says Bill Eberlein, a highly trained scuba diver who sifts through exposed portions of this bottom layer in search of some of the most unique fossils found anywhere on the planet. The rewards are impressive and include finds like a 12-pound mammoth tooth and an ancient mastodon tooth. But Eberlein says the real thrill for him comes from finding teeth that once belonged to one of the largest predatory marine animals to ever roam the ocean—the megalodon shark. This shark was estimated to be 60 to 70 feet long and could weigh up to 100 tons; its teeth could be about the size of a human hand and are extremely rare.

“I have dove somewhere between 250 to 300local spots where the conditions looked just right, and I have only found something worth bringing up in maybe 10 to 12 of those spots,” Eberlein says, adding that more than 99 percent of the fossils he encounters are in poor shape and badly broken due to exposure and natural decaying processes.

With that record, it might be hard to understand why about three times a week he takes the risk of diving for the teeth. “It’s kind of funny, because when you learn to dive you’re taught: Don’t dive alone,” he says. “Don’t dive in water with limited visibility, especially if there are strange creatures in it. Don’t dive in strong currents. And I not only do one of those, but I do them all at the same time.” Stories of his numerous encounters with the wildlife and occasional gear malfunction only add to the question: Why? Eberlein makes money from recovering these fossils and selling them to fossil fanatics across the world, but selling at just a few hundred dollars a pop, there must be another reason for his excursions. “I love being able to educate people about these amazingcreatures that once swam in our waters,” Eberlein says about his work. “I love being able to preserve that history.”