Local shark teeth diver Bill Eberlein experienced a first in his lifetime when he recently found a mastodon jaw embedded in the mud at the bottom of the Intracoastal Waterway near Richmond Hill recently.

“I have been diving in coastal Georgia rivers for over 15 years for prehistoric shark teeth, but this is the first time I have discovered a mastodon jaw,” Eberlein said.

“Mastodons roamed North America during the Ice Age, and it is believed that they last roamed what is now the southern U.S.A. 75,000 years ago and finally became extinct throughout the continent 10,000 years ago,” he said. “They were sturdy elephant-like animals about 9 feet high at the shoulder and weighing between 4 and 5 tons.”

Eberlein, a south Bryan County resident, is a professional diver who finds prehistoric teeth from sharks who went extinct more than 2 million years ago in the muddy waters of coastal Georgia — where there is normally zero to 3 inches of visibility.  A former teacher turned entrepreneur, he got hooked on diving 25 years ago and now spends his days diving for ancient megalodon shark teeth, which can be up to 6 inches long.

“I was doing my normal dive when I felt what I thought was a fossilized log, but when I felt the molars I knew I had found something very rare,” he said, talking about his mastodon discovery. “I have found individual mastodon teeth occasionally in the past, but this is very exciting. It was really heavy to bring to the surface after I dug it out of the mud and weighs about 60 pounds.”

Eberline was diving in about 45 feet of water when he found the mastodon jaw.

For more information and photos of fossils, go to www.megateeth.com . 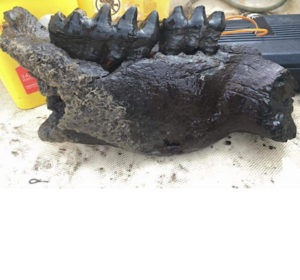