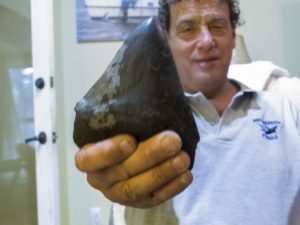 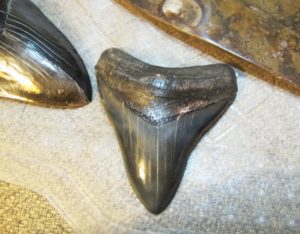 For 19 years,  Bill Eberlein spends his days 40-60 feet deep in Savannah’s rivers and the Intracoastal Waterway, blindly digging through mud in search of what’s left of the elusive Megalodons—their fossilized Megalodon Teeth.

Eberlein was raised in Erie, Penn. Growing up, his parents always took him to the beach, so he loved swimming, he said. In college, he had friends who dived, and they encouraged him to take lessons. Eventually, he dived for the Sheriff’s Search and Rescue for nearly 15 years. They would recover contraband that had been abandoned in the lake, he said.

Where it all Began

Eberlein’s quest for teeth began in 1999. He relocated to the area and took a job at Gulfstream. While working, he met a fellow diver that would jumpstart his desire to dive for fossilized Megalodon teeth.

“I did a search on a website called Scubaboard, and looked for Savannah,” he said. “This guy came up that worked at Gulfstream.”

Eberlein contacted the man, and asked him what they dived for, thinking shipwrecks. He was skeptical when he heard shark teeth.

“I thought that’s the dumbest thing I’ve ever heard, because I was thinking the little tiny shark teeth,” Eberlein said. The diver brought in an example of a tooth they found and Eberlein knew immediately that he wanted to find one.

“Once I went out a couple of times, I was really hooked,” Eberlein said. “Every day off I’d want to go diving… so eventually I bought a boat and started diving around here.” When he first began collecting, he’d go out and buy empty pizza boxes to store the teeth in, he said laughing. Underneath his bed was “filled with boxes of teeth”, and over the years, he’s found nearly 10-20,000 teeth, he said. “It sounds crazy — but I left Gulfstream to go to Savannah Technical College to teach, and eventually I just left there,” he said. “Now I dive and sell shark teeth full-time.” 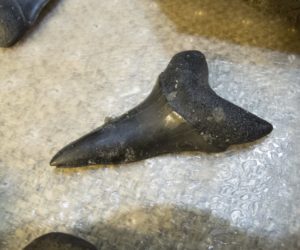 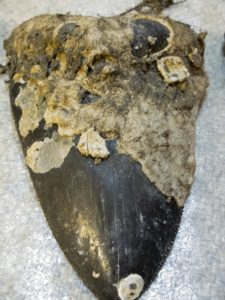 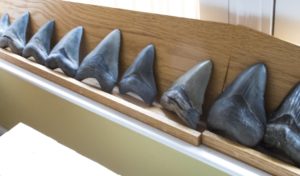 The process doesn’t seem easy, however. Eberlein works in zero-visibility every day, diving into holes that range anywhere from 40-60 feet deep. To find the teeth, he said, first he has to locate the hard bottom, that contains mud, clay and sand, with the fossils underneath. Once he discovers a bone bed, he’s close.

“I start digging, and when I feel whale vertebrae, whale rib bones — I know I’m in that area where the shark teeth are,” Eberlein said. Normally, Eberlein averages three teeth a dive. Even buried in mud, clay and bones, a tooth is easily identifiable, according to Eberlein. Sometimes, it’s just instinctual, he said. When he picks up a tooth, the root has a certain feel, and apparently, the enamel does too.

“Underwater, the enamel feels like glass, because it’s wet and really slick,” Eberlein said, while holding out a tooth to prove his point. As much as he does it, he said, as soon as he touches one, he knows.

Eberlein finds an estimate of five Megalodon upper teeth for one lower tooth, because the sharks didn’t lose them as quickly, he said. Holding up a tooth for reference, Eberlein said that the size of the shark is roughly one inch of tooth for every 10 feet of shark.

The furthest that Eberlein has traveled searching for these teeth is Wilmington, N.C. He goes 40 miles offshore, he said. “It’s fun diving there, but the teeth here in Savannah and surrounding areas are in nicer condition,” Eberlein said. “I find a lot more in North Carolina, but they’re just not good condition.”

In January of 2015, Eberlein did have an incident where he was presumed missing after a dive in St. Catherine’s Sound. In what he admits was entirely his fault, he became complacent after diving in the area repeatedly, and that day decided against tying off to the anchor.

“Yeah, I went missing once,” he chuckled. “I used to be a dive instructor, and what we taught was that 99 percent of scuba diving accidents are the diver’s fault — not because something bit you, not because the gear malfunctioned — it’s because the diver did something.”

Eberlein was located floating nearly four miles out and two miles south of where he started, he said. “I was fighting a 10 foot tide change, and it kept dragging me back, and I didn’t realize how far I had gotten dragged,” Eberlein said. “I came up right in the path of the sun, further back than I should have been; I did a bunch of things wrong, so I got shot out into the ocean.”

His boat captain realized he had been down longer than his usual hour. The captain contacted the Coast Guard, and St. Catherine’s Sea-Tow, as well as the Liberty County Volunteer Fire and Rescue and Georgia’s Department of Natural Resources, Eberlein said.

“It was kind of embarrassing because you feel like you inconvenienced a whole lot of people,” Eberlein said. “I don’t do that anymore. I always tie off on the anchor line, and if the tides going out, I’m especially careful.” Of course, after being declared missing, one begins to wonder if Eberlein suffers any other close calls while diving in local waters.

The Other Dangers of Diving

“I’ve been bumped a couple times, I’ve been grabbed,” he said. “One time, something grabbed my fin and spun me around, and I kicked it, it went away, and came back and grabbed me again.” Eberlein said he doesn’t know what it was, possibly a shark or dolphin, but he does know it was solid. “Like I said, I’ve made thousands of dives, and anything similar to a close call or scary, was something I caused,” he said.

Eberlein did admit that he went to see “The Meg,” recently released in theaters. “If they were still alive, they would be eating boats,” Eberlein said. “Scientists said they were warm water sharks, and they were always found in Peru, Chile and off the southern part of the U.S.”

When asked if he ever wanted to dive elsewhere, he laughed; he doesn’t have a desire to dive when traveling, he said. “It’s funny, we visit the Florida Keys a lot, and I don’t really have any desire to dive,” Eberlein said. “I like the clear water, and the fish, but it’s gotten to be where now I like to find stuff… so I don’t dive unless I’m going to find something.”

“All I wanted to do was go diving every day for shark teeth, so I turned it into a job,” Eberlein said.

To purchase the teeth that Eberlein finds, visit our shop to see the current selection we have for sale.