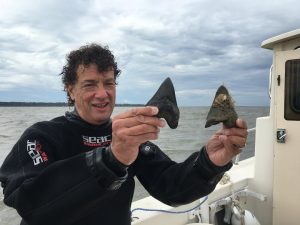 Bill Eberlein is passionate about his job, but as he says, it’s not really working when you greatly enjoy what you’re doing! He is a professional scuba diver who seeks out prehistoric megalodon shark teeth in the coastal waters off Georgia’s coastline. Not your usual 8 to 5 job.

Although he holds a BS Degree from Penn State in accounting and economics and a master’s in accounting, Eberlein tired of being behind a desk. He worked as an Internet technology professional for Gulfstream Corporation and even did some teaching at Savannah Technical College. Then one day a friend showed him a huge megalodon shark tooth that he had found off the Georgia coast, which really got his attention.

Eberlein was already a certified scuba diver who often volunteered in search and rescue efforts; thus, it was only a short time before he started diving off the Georgia coast looking to find his own megalodon treasures. Once he had found several megalodon teeth, he discovered that there was a strong commercial market for the fossils, and he started to sell some of his finds to supplement his family income.

That was several years ago and now Eberlein dives for megalodon teeth 3-4 days a week and was able to quit his day job and do what he genuinely loves. He says every day he is outside, enjoying nature, watching the day come alive with a blue sky overhead and the sun shining on his face! He gets to see thousands of shore birds and other wildlife on his outings and every day is an adventure. He says he never gets bored and that is truly a blessing.

I had the good fortune of meeting Eberlein at a Georgia Outdoor Writers Association meeting where he had come to display his fossils to our members. We shared a common interest in fossils, history and the outdoors, so it was only a couple of days later that my wife Billie and I were in Eberlein’s boat, heading to the diving waters off St Catherine’s island. But before we get into the dive, lets discuss a little ancient history.

The megalodon, the huge shark whose name in Greek means “big tooth,” was the largest shark to ever swim. Try to imagine a modern great white shark, only four or five times bigger! Megs, as collectors call them, could grow as big as sixty feet long. They lived between twenty-three and 2.6 million years ago, well after the dinosaurs who disappeared 65 million years ago, and well before modern humans, who date back about 150,000 years. Their distribution was global, but they were common in warm southern waters. Once the megs died, their bodies, which were mostly soft cartilage, disappeared, but their teeth became part of the sediments off the Georgia coast. Megs are not the only ancient fossils off the Georgia Coast.

Eberlein has also found mastodon fossils, which is the ancient ancestor of today’s elephants. But wait, how can land animal fossils be found in the same offshore sediments as shark teeth? A little geology lesson is in order.

The earths surface is always changing, and the oceans rise and fall large distances over time. At the time of the megalodon sharks, much of Georgia, south of the fall line, which was an ancient seashore, that runs from Columbus to Macon to Augusta, was under water. The seashore receded over time as the Appalachian Mountains to our north eroded and formed South Georgia. Eventually the seashore was about 30- 50 miles further off the coast than it is today as water was trapped in ice from the last ice age.

When the ice from the last ice age started to melt 15,000 years ago, the oceans started to rise, but not before mastodons, wooly mammoths, horses, camels, buffaloes, giant ground sloths and other vanished live forms, swarmed, lived and died over the vast grasslands of coastal Georgia. In the last 15,000 years, some of coastal Georgia was gradually flooded by rising ocean waters, so that explains how we can have both ocean and land fossils off the coast of Georgia.

But the oceans continue to rise as we are in an extended period of global warming with the oceans rising by one – eighth inch per year. That seems like a small amount, and it is, but over time it mounts up and over just a few hundred years, water will be flooding into our coastal cities like Miami, Washington DC, and New York. We can try to slow it down but eventually the water will win until the earth enters another cooling period. But let us get back to finding meg teeth!

As Eberlein slowed down his large boat off the southern end of St Catherine’s Island, he quickly eased into his skin-diving wet suit, put on his air tanks and weight belt. He explained that visibility in the water was only a few inches as he creeps and crawls on the bottom to feel with his fingers for meg teeth and other fossils in the dark, cold water! It sounded rather spooky to us! To ensure his safety, Eberlein snapped his 150-foot search line to the anchor line, that rests on the bottom, so that he can drift a short distance from the boat. Then he flipped off the boat into the 30-60 feet deep water and disappeared into the murky water.

Billie and I were in the boat with Eberleins boat Captain, Gene Ashley, who is his business partner and safety Director. Luckily, Ashley was with Eberlein a few years ago when he decided to unhook his safety line and search just a little further from the boat. But an hour later, when his air supply should have run out, Eberlein had not surfaced and was nowhere to be found! Asley called in missing man alarm to the US Coast Guard, the Georgia DNR and the Liberty County Search and Recue team. Hours later Eberlein was found swimming in the water several miles away from his last boat location. He was one lucky man and today he never detaches his safety line!

Eberlein also must often deal with sea creatures that are lurking in the dark waters. Many times, he has grabbed something that moves like a stingray or crab and sometimes  something brushes up next to something that is much bigger than himself like a porpoise or shark. Once he has something clamp down on his fin and spin him around! Feeling defenseless, he just laid on the bottom for a few seconds, thankful to be alive, until he figured the danger had passed! This is not the profession for the faint-hearted person!

About an hour later, Eberlein surfaced from the ocean with his yellow mesh bag filled with meg treasures from the deep! He had found about 18 meg teeth, which was an incredibly good haul for the day. He also found a large mastodon bone that was too heavy to bring to the surface! We laid out the treasures of the deep and closely admired them. Billie and I had an amazing adventure with Eberlein and Ashley and you too can see and buy some of his megalodon teeth for sale and read about his adventures at megateeth.com. He often makes appearances at trade shows and craft fairs and can be contacted at bill@megateeth.com.  There is even a fun movie about megalodons called “The Megs” starring Jason Statham- check it out. Thanks Bill and be careful out there! To purchase a copy of Trussell’s book, “Saving Oaky Woods” contact him at 478-957-7411.