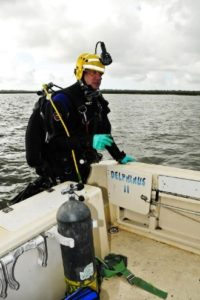 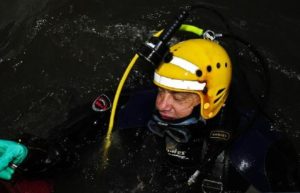 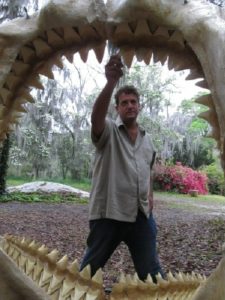 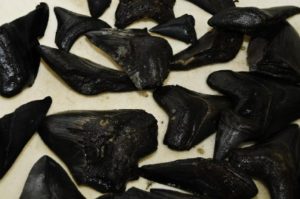 The waterways of our community are of course one of the main reasons that people love the Landings: the number of boating enthusiasts here proves it. However, for one person at least it is what lies in the murky depths of these delightful waters that is the reward. Ace diver Bill Eberlein is obviously passionate about diving in the muddy, sediment-filled rivers of coastal Georgia to find beautiful prehistoric treasures: Megalodons teeth!
“This whole area used to be under water up to around two million years ago, so huge Megalodon sharks – bigger than some of the largest whales today – dominated the aquatic life in this region. Sharks lose many teeth and grow new ones throughout their lifetime and the Megalodons had five rows of teeth which measured up to an impressive six inches long” says Bill. “These teeth are what I dive for every day in our rivers – visibility is practically zero down there and I have to sift through the mud with my hands; but I still get a real thrill every time I find one” he adds.

Originally from Pennsylvania, Eberlein relocated to coastal Georgia 13 years ago to work at Gulfstream. Eberlein also has two master’s degrees and is a part time instructor at Savannah Tech. He got hooked on diving 25 years ago and a few years ago turned his hobby into a profession. “It wasn’t until I moved here and found out about the numbers and quality of shark teeth in our region that I began to focus my diving on retrieving these fossils.” Eventually he began selling the shark teeth via his website, www.megateeth.com and started to devote all his time to this business a couple of years ago. He now also sells his finds at the First Saturday Event on River Street in downtown Savannah and will be at the Tall Ships Festival in Savannah from May 4th – 6th.

Eberlein likes to dive in the Isle of Hope and Vernon River around Skidaway Island as long as he can dodge the boat traffic! As well as the Megalodons teeth Eberlein finds smaller Mako shark teeth and other fossils such as mammoth teeth, vertebrae and tusks from when these creatures roamed the land during one of the ice ages. But he still gets most excited about the Megalodon teeth and so do many enthusiastic collectors. Every tooth available from Megateeth has been retrieved from our local waterways and cleaned by Eberlein himself. No mere buying and reselling for Bill: every fossil he sells comes up from the deep – discovered by his own hands.
Who collects these fossils once Eberlein has finished the process of cleaning? “The range of people who collect shark teeth is amazing” he says. “There are a significant number of high end collectors who want only the biggest and best fossils available and some people have beautiful and impressive displays of magnificent polished shark teeth. The teeth I find in coastal Georgia are generally in very good condition because there is a lot of clay in the mud which preserves the serrations. In some areas with a lot of gravel and sand, the teeth become badly eroded over the two million years they remain hidden.”

color of minerals in the places they fossilize so teeth found in our region are a rich black and gray. Surprisingly, because the world has changed so dramatically over the millennia, whale skeletons and shark teeth have been found in the deserts of Peru and Chile (which used to be under water) where shark teeth have a reddish hue.
“Young people in particular are fascinated with prehistoric dinosaurs and sharks and love to own something that was in a giant Megalodons shark’s mouth over two million years ago. They get so enthusiastic about massive prehistoric creatures that don’t exist now – and Megalodon sharks weighed more than 50 tons and were more than 60 feet in length – which was ten times bigger than the Tyrannosaurus Rex” Eberlein explains. “I expected parents to buy shark teeth as a cool gift for their kids but what I did not expect was whole families to become interested in collecting them. I guess they feel the same fascination as I do when they touch and hold something so ancient – a link between us and the dinosaur age.”