Prehistoric Prizes – Diving in our Rivers 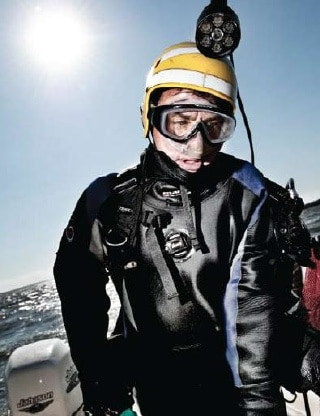 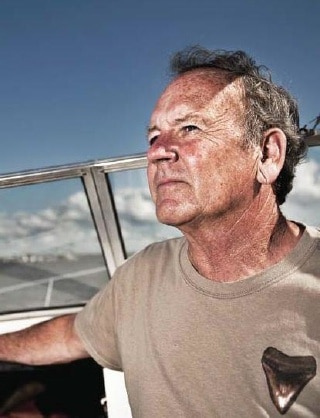 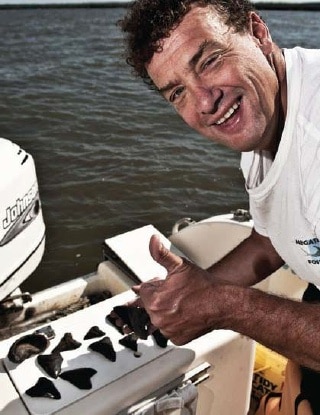 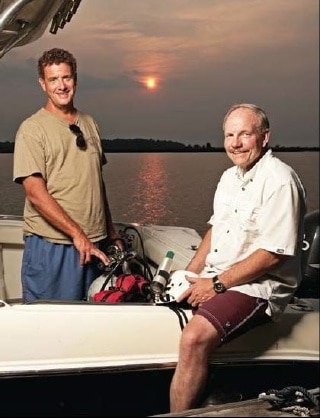 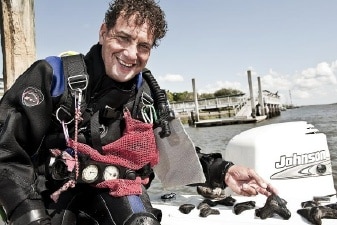 Those of you stirred up by the latest of the Pirates of the Caribbean franchise might associate treasure with tall ships, exotic waters and devastatingly handsome Johnny Depp wearing too much eyeliner. Diving from crafts less romantic than the Black Pearl are a handful of people in Richmond Hill who find prehistoric prizes that were once a part of Carcharodon Megalodon and it’s toothy grin. Megalodons are extinct prehistoric sharks from the Miocene epoch, 15 to 20 million years ago, and the Florida Museum of Natural History puts adults at 60 feet long and 77 tons.

Their mouths, easily the size of some bonus rooms around town, contained 276 serrated teeth ranging 3 to 7 inches in length. Many of these teeth were shed or lost during ferocious attacks on whales, a staple in Megalodon’s diet. The tidal rivers in our area have cut through the Earth’s surface and made the teeth reachable by divers, but there is a catch. You have to find them blind. Bill Eberlein, is an accounting and computer teacher at Savannah Technical College and the incoming president of Richmond Hill’s Rotary Club. “Picture being blindfolded and dropped down in the middle of a football field,” Bill says describing 90-minute dives where he regularly brings up two or three good teeth and a few chipped ones.

Ray Pitman is an Engineer at Thomas & Hutton, he designed the drinking water system, sewer, storm drainage and lakes, and the roadway system for the Ford Plantation, and is a member of the Board of Directors for the Richmond Hill/Bryan County Chamber of Commerce. Like Bill, he is a very experienced diver, and the only type who should attempt this black-water variety. “You’re down there with strong currents, and six inches of visibility is a luxury. I have a $1,200 dive light, and, even with that, I can’t always read my gauges,” Bill says. “The filament inside that light,” Ray explains, “burns 4,700 degrees.”

Even that only offers a clue to their surroundings. The two can be diving near one another and not realize it until they bump into each ot her. “I went down with him for the first time, and it scared the crap out of me,” Ray admits. When you can’t read your gauges, how do you know when to come up, Ray wanted to know. Bill’s answer was, “when it gets hard to breath.” That wasn’t precise or safe enough for the former military man, so Ray uses a mask often used in cave diving. A digital display on the inside of it makes it easy to see his depth, air pressure and how long he’s been down. Typical diving gear includes a wet suit with thin gloves. They dive all year, so a dry suit that seals around the neck and wrist is necessary during cold weather. Weights keep the treasure hunters on the bottom where they can dig hands and arms down through silt to fossil beds.

Both Bill and Ray have mistaken the smooth shell of a crab for the enamel on a shark’s tooth. Painful pinches and bumps in the darkness by much larger marine life can spook divers, if only for a few seconds. “It’s most likely by sturgeon, I think,” Ray says. “Because they’re real clumsy. They bump you, and it scares the begeezus out of you. I’m a screamer, so whenever something bumps me I scream.” He demonstrates a terrified scream hampered by a regulator. Sound is distorted underwater, and paying attention to it helps you stay safe. Boats might sound far away but be quite close. Ray says that he has even heard fish crunching on barnacles. “It’s like when you’re eating cereal–it really is.”Megalodon teeth vary in quality, and the price for museum quality teeth is such that it keeps divers very hush, hush about their favorite hunting grounds. “The Tivoli River,” Bill says and little more. He sells the Megalodon teeth that he finds on a site called Megateeth.com. Ray, however, has had his collection confined to a bookshelf. “That’s all my wife will give me,” he laughs.

Gene Ashley is originally from around Charleston, South Carolina and, five years ago, Bill hired him to captain the 23-foot Sea Era from which he dives. Gene lived and worked for many years just south of Atlanta. Now that he’s in semi-retirement, he takes Bill out diving four or five times a week. “Basically, I got sand in my shoes. Couldn’t wait to get back to the coast,” Gene says. He’s got a good gig. While Bill and Ray dive, Gene sits above in every kind of weather except lightning. When divers come up, they hand Gene their mesh bags of teeth, and then he helps them on the boat. Then they are off to another location to try again. Gene doesn’t mind the waiting. Even on gray days, the water is a gorgeous silver. Pogies, also referred to as shad, break the surface with a frantic flutter from time to time.

Gene has seen a mother dolphin carrying her dead calf out to sea on her nose and a Right whale breach and come down with a terrifying thud. Most days, though, it’s calm, and Gene just prays for a stiff breeze to keep the gnats away.