My name is Bill Eberlein and I am the owner of Megateeth Fossils. i founded Megateeth Fossils in 2001 and it has been a leader in offering Museum Quality Megalodon Teeth to the public ever since. The fossils on the site were found by me while diving the East Coast of the US.

I starting SCUBA diving in 1986 in Erie PA. Back then most of my diving was on shipwrecks in Lake Erie where we found all kind of cool stuff. In 1992 I became a NAUI SCUBA Instructor and taught classes for five years. In 1999 I moved to Savannah GA to take an I.T. job with Gulfstream Aerospace. At Gulfstream I met a coworker that dove the local rivers for giant Megalodon Shark teeth. In late 1999 I made my first fossil dive on a charter boat in Hilton Head and was immediately hooked.

In 2000 I dove as much as I could and found hundreds of Megalodon teeth. I decided to sell some of my finds to finance a new boat and in 2001 Megateeth Fossils was born. I found that by selling some of my finds I could justify diving more. In 2003 I left Gulfstream to teach I.T and Accounting for Savannah Technical college. In 2008 I decided to dive and sell fossils full time.

The teeth on my site were found by me . Sometimes I will sell a tooth found by a friend but I prefer to sell fossils that I personally found. If you buy a tooth from my site it means that unless otherwise noted it was found by me.

All purchases on the site come with a display stand, certificate of authenticity and a magazine article that gives information about my fossils dives. If you have any questions please feel free to call me at 912-656-2920 or e-mail me at bill@megateeth.com. 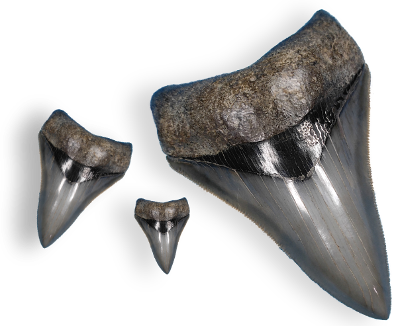