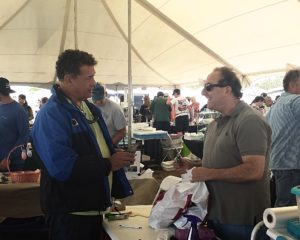 For One Venice Shark’s Tooth Festival Dealer, Diving is a Way of Life

The arrival of April brought with it the 25th Annual Venice Shark’s Tooth Festival. This event, with its lively mix of bands and eclectic vendors, was as fun as ever. Cold beer and tasty “fair food” helped to round out the experience, although one of the desserts arguably should have come with a pair of defibrillator paddles. For fossil hunters, though, the real action was in the three large tents devoted to the folks selling the items from which the festival takes its name.

To be sure, the fossil dealers on hand offered a selection of specimens far more expansive than just shark’s teeth. Festival goers could purchase fossil fish from Wyoming, ammonites from Russia, trilobites from Morocco, and all manner of vertebrate and invertebrate fossils from Florida’s myriad rivers and streams. But still, you couldn’t ignore the shark teeth.

Dealers from not only Florida, but also the Carolinas, had case after case of large, impressive teeth, mostly from the giant prehistoric shark Megalodon. This beast, which – luckily for us- died out millions of years ago, once prowled the waters of Florida and the Southeastern US. Since sharks lack an actual skeleton, fossil Megalodon remains largely consist of vertebrae and, of course, those impressive teeth. With estimated lengths of 50-60 ft. and a mouth over 6 feet wide, Megalodon left behind some very impressive choppers indeed.

Locally, the Megalodon teeth can be found both onshore and offshore, with some of the largest currently being found by divers just off the beaches of Manasota Key. Some of the most productive beds, however, are in the coastal South Carolina and Georgia areas. The teeth are highly prized by collectors and have allowed at least one dealer who was at the Shark’s Tooth Festival, Bill Eberlein, to make it a full-time job.

The owner of MegaTeeth Fossils, Bill didn’t start out as a professional fossil hunter. With  degrees in accounting and information technology, Bill took up diving originally as a hobby. After doing his first dive for shark teeth off of Hilton Head in the 1990’s he got the fossil hunting bug in a big way and, in his own words, “was hooked ever since.”

Most days of the year Bill and his boat captain partner, Gene Ashley, prowl the creeks and rivers of Liberty County, Georgia. Working depths usually between 40 and 60 feet, Bill practices what is referred to as “black water diving”. Due to the large amount of sediment in the water, visibility – even with a powerful light- is virtually nil. This means primarily feeling around the bottom for fossils with his hands, with no idea as to what might be sharing his underwater space.

While Bill has found mastodon and mammoth teeth, the ultimate prize is always the Megalodon tooth. The largest specimen Bill has ever found measures 6.94”, just shy of the elusive 7” mark (shark teeth are measured on a diagonal from the point to the highest corner of the root.) While condition and color are always important, shark tooth values are predicated in large measure on size. And, with each inch as a benchmark, 7” is considered something of a Holy Grail among collectors. Teeth larger than 6” can sell for thousands of dollars and a tooth exceeding 7” would likely get into five figures.

Black water diving in Georgia and the Carolinas is not without significant risks. Currents can be treacherous, and Bill was once carried 6 miles out into the Atlantic before being rescued by the Coast Guard. Also, with no visibility, it is impossible to tell what might be swimming next to you. As Bill told the Manasota Fossil Club in a talk last year, he was once spun around twice by something that grabbed one of his swim fins. “I came up after that”, he admits. Such diving can even be fatal… last year, renowned fossil hunter Vito Bertucci drowned while diving for shark’s teeth in Georgia’s Ogeechee River.

Still, Bill feels that the rewards far outstrip the risks. He has collector clients all over the world and makes a living doing something that many people only dream about. Some fossils he keeps for his personal collection, most he sells, and others he donates to charitable causes. Assisted at the fossil shows by his charming wife Dodie, Bill tells me that he is already looking forward to next year’s shows in Florida. You probably won’t ever see his 6.94” tooth, though. That tooth, described as “the find of a lifetime”, is kept in a safe deposit box and Bill doesn’t intend to sell it. Unless, perhaps, that 7” tooth finally comes along. 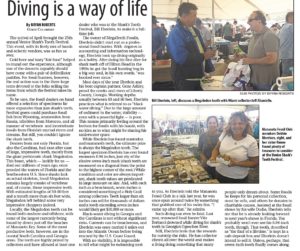