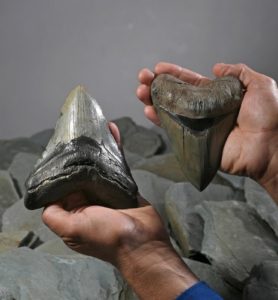 Maybe that’s why the 54-year-old Erie native is so comfortable most mornings when he plunges 40 or 50 feet into the dark waters of the Atlantic Intercoastal Waterway, near his home in Richmond Hill, Georgia, and proceeds to feel his way along the soft bottom of the river.

He’s not hunting for gold or even the lost remains of a shipwreck. Instead, Eberlein, who studied accounting and economics at Penn State Behrend, is feeling through the soft mud for the remains of what might have been the largest, fiercest creature ever to swim.

Eberlein searches the bottom of the Intercoastal and other waterways, four or five times a week, for the fossilized teeth of the Megalodon, a giant shark — many times the size of a great white shark — that’s been extinct for more than 2½ million years.

Although they’re typically concealed in layers of mud — he finds them by touch — there’s no mistaking a Megalodon tooth when he does find one.

The teeth are big. Some weigh 1 pound or more. And while an average tooth might be 4 or 5 inches long, the longest are more than 7 inches.

Eberlein, who dives 12 months a year, usually twice a day, sells them on his website: https://megateeth.com/

Eberlein, who still returns to Erie several times a year to visit family, including a visit last week, didn’t plan a career collecting the teeth of these giant, prehistoric sharks that could measure up to 60 feet long and weigh more than a fully loaded semi-truck.

After graduating from Behrend in 1989, he worked for a decade in a variety of information technology roles for local companies including Steris Corp, the Barber Center and Rent-Way Inc. When Steris wanted him to transfer to Mentor, Ohio, in 1999, Eberlein resisted.

That someplace turned out to be near Savannah, Georgia, where he landed a job with Gulfstream Aerospace.

The job and the weather were good, but he missed diving the shipwrecks near his hometown. When a friend at work invited him to go diving, Eberlein was ready.

“But when he said we were going diving in the river for shark teeth, I thought it was the dumbest thing I had ever heard.”

He admits now that he was picturing something smaller than the 1-pound teeth he regularly pulls from the darkness of the water, where he often bumps into sea creatures that he can feel but not see. And he certainly didn’t have a sense of the history that he was touching on the first dive down with his friend.

That all quickly changed.

“At first, I thought I would like to find one or two,” he said.

But one dive for Megalodon teeth was followed by a second, then a third and a fourth.

“I was immediately hooked and obsessed,” he said. “I used to put them in pizza boxes and store them under the bed. One day, I couldn’t fit any more pizza boxes under the bed. I started to think I could get a boat and use the shark teeth to make boat payments.”

“Within a year, I was making more selling teeth than I was making at Gulfstream,” said Eberlein, who sells chipped shark’s teeth for as little as $30 or large museum-quality specimens for as much as $1,000.

By 2003, he had decided to quit his job at Gulfstream, although he had taken a job teaching at Savannah Technical College. But eventually, the fantasy that lived in his head, the idea of diving every day and being his own boss, won the day.

He quit his teaching job in 2008 and has made a living off his Megateeth website ever since.

Eberlein, who dives alone while his wife or a paid captain operates the boat, said he never really gets tired of his routine that takes him out diving most mornings.

While he rests between dives, he snaps photos of what he’s collected and posts them online. Many customers are eager to buy his most recent finds, he said. Sometimes he attends shows, but most sales are online.

His favorite part is finding these teeth that were deposited, 276 at a time, millions of years ago.

“I never know what I am going to find,” he said. “I average two or three teeth a dive. There are days I find I find 15. There are days you do really good. I worked in industry for 15 or 20 years. Even on a bad day, it’s not bad. I know what it is to go to a job you don’t feel like going to every day.”

Business was especially good, he said, after the August 2018 release of the science-fiction movie “The Meg,” which tracks a group of scientists who encounter a 75-foot Megalodon shark.

But it’s not for everyone. Even fellow divers who have gone along don’t always like what they don’t see at the bottom of murky river, digging in the mud for shark teeth.

“People think it’s crazy,” he said. “I kind of come back to my diving in Erie where we dove in water that was not super clear. There are sharks in the water, but they don’t usually bother you.”