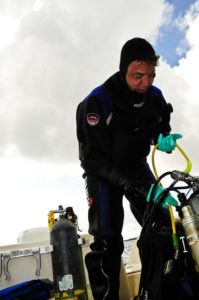 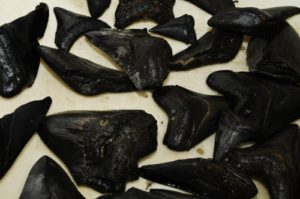 Just when you thought it was safe to sit on your couch and watch television, “Shark Week” returns with its popular nail-biting week of chummed-water feeding frenzies and terrifyingly up-close shots of hungry man-eaters.

“Shark Week,” the popular week-long annual event airing seven days of shark-related programming on Discovery Channel, begins Aug. 4 and proclaims this year’s run to be a “bad week to be a seal.”

What seal are they talking about? A little guy named Snuffy the Seal. The “Shark Week” promos show scenes of Snuffy snatched up by a great white shark while onlookers gasp in horror. The story behind Snuffy is fictional, but the big story last year about a Megalodon named Sharkzilla is based on a very real creature that lived in our oceans millions of years ago.

How do we know Megalodons were real?

Because guys like Savannnah diver Bill Eberlein scour our nearby Intracoastal Waterway and tidal creeks in search of Megalodon teeth — the only surviving evidence that these massive prehistoric sharks existed.

Discovery Channel’s highly rated episode titled “Sharkzilla” explained that the prehistoric sharks called Megalodons were the most fearsome predators in the oceans millions of years ago and measured up to 70 feet long.

The word Megalodon means “big tooth,” and according to Eberlein, the Megalodon teeth he collects from Lowcountry waters are mighty big.

“The biggest teeth I have found around here are about 6 inches long, weigh about 1 pound and are 4 inches wide,” Eberlein said. “It’s big enough to fill your entire hand.”

But Discovery Channel claimed Sharkzilla could kill a 25-foot baleen whale with a single chomp of its 8-foot jaws. Does that seem possible?

“I saw the episode of ‘Sharkzilla,’” Eberlein said. “It’s definitely very realistic and plausible. “When people ask me how big Megalodons were and I tell them that they were 60 feet long, I think they have a hard time picturing it as a three-dimensional object. So, I tell them to imagine the largest whale out there and think of it as a shark.

“The recreated Sharkzilla is pretty accurate. They could definitely eat a whale. People would just be a little snack for a Megalodon.”

As a matter of fact, Eberlein said he knows he is close to unearthing Megalodon teeth when he finds areas full of fossilized whale bones. But he can’t see them — he has to blindly feel his way around in the murky depth of our coastal waterways.

“Sharks shed thousands of teeth each year,” Eberlein said. “Millions of years ago, the ocean covered much of the land we walk on today. Sharks swam right where we now stand.

“The bottom of the ocean was littered with shark teeth, and those were eventually covered with sediment and clay and became fossilized.

“You have to get down 40 feet from sea level to find these Megalodon teeth, and to do that you have to explore our rivers, estuaries and the Intracoastal Waterway.”

But Eberlein doesn’t recommend his hobby to other divers. “There are too many risk factors with what I do,” he said.

Eberlein became a certified search and rescue diver almost 30 years ago when he lived in Erie, Penn. He spent many years conducting search and rescue operations in Lake Erie, an area known for tough dives, and his instructor and mentor, Sam Leo, insisted on training his team in areas of limited visibility.

Eberlein moved to the Savannah area about 14 years ago to work at Gulfstream in the IT department and was introduced to diving for Megalodon shark teeth.

“A good SCUBA instructor always tells his students to never dive alone, don’t dive in low visibility, stay away from strong currents and don’t dive in areas with dangerous creatures. I essentially do all of those things,” Eberlein said.
“You cannot get a certified diver to do charters in our rivers because it is just too dangerous. There is no visibility and I can’t see my equipment or gauges, so I have to just feel my way around in the dark. Sometimes I feel animals bump against me and I don’t know what they are or I worry about reaching out for a stingray,” he said.

“The currents are strong and I have to be mindful and careful. When it gets harder to breathe, I know I’m running low on air. But I think the amount of danger depends on experience, and I have become accustomed to these situations.”

But Eberlein is never really all alone when he’s diving. His friend and boat captain Gene Ashley drops off Eberlein for his dives.

“He stays on the boat and fishes or reads a book and then picks me up when I’m finished,” Eberlein said.
Despite claims made by Discovery Channel’s scientists in “Sharkzilla,” Eberlein laughed at the idea that these shark teeth are razor-sharp and could slice your hand if not handled correctly.

“I laughed when I saw that part of the episode,” he said. “You’re not going to accidently cut yourself on these teeth. They are like a dull knife.”

While the teeth may not be razor sharp, Eberlein admitted he’s been bitten by the shark-tooth-hunting bug — and the teeth are clamped on tightly.

“I love it. I go out about three or four times a week. I really enjoy showing people the teeth I find and educating people on the creatures from our past. This is my hobby, not a job.

“I can dive five days in a row and never get tired of it. There is something so exhilarating about feeling that tooth in your hand. It’s my passion.”

To get a closer look at Eberlein’s collection of Megalodon teeth, go to www.megateeth.com.